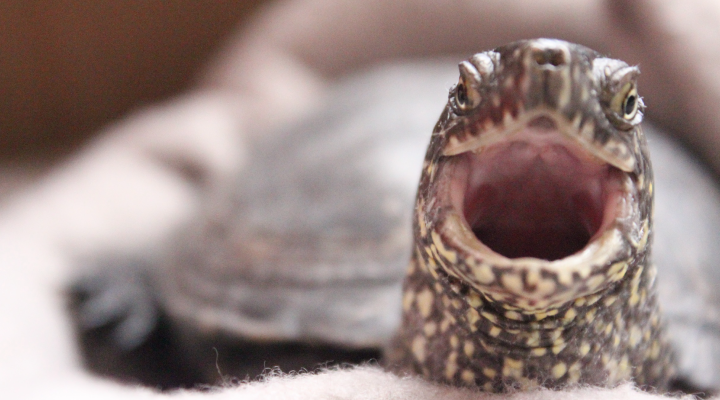 Turtles: Our slow-moving, shell-wearing friends. With over 318 species that exist in the world, we can’t help but wonder: Do turtles have teeth? Let’s take a closer look at their diet to find the answer.

Do turtles have teeth?

Turtles don’t have teeth. Neither do tortoises or terrapins. Their powerful and oddly-shaped beaks tell us a lot about what they eat. Some turtles—like green sea turtles—have serrated ridges along the inside of their beaks that simulate teeth. They use these sharp edges to tear sea grasses apart and scrape algae off of hard surfaces in the ocean. Omnivorous species—such as Loggerhead turtles—have powerful jaws, so they can crush hard-shelled species. Other omnivorous turtle species such as the Leatherback turtle have a sharp, pointy beak that allows them to hold onto to slippery prey such as jellyfish.

What about snapping turtles?

One of the most common turtles in North America, snapping turtles, are known for being voracious eaters of small mammals such as ducks and mice. As with most turtles, their diet consists mainly of plant based foods. Snapping turtles usually won’t bite humans, but if given the opportunity, they may bite your hand or foot.

Baby turtles have one tooth.

Like reptiles, turtles lay eggs. Turtle eggshells have leather-like strength and are difficult to crack open. Because of this, baby turtles are born with an “egg tooth.” This small and sharp protrusion extends from the front of their beaks and is used to cut through the shell. Once the hatchlings are free from the shell, this “tooth” falls off within the next several days.

Though turtles don’t technically have teeth, their jaws and beaks serve as an effective replacement.

At Delta Dental, we believe in the power of a healthy smile. That's why it's our mission to help create more smiles and healthier people in our communities. Our mission We create healthy smiles in the community through our people, access to quality … END_OF_DOCUMENT_TOKEN_TO_BE_REPLACED