Give your teeth some extra flossing and smile your best smile because Tooth Fairy Day is February 28! In honor of Tooth Fairy Day, we took a poll of parents in Virginia to find out what the going rate for a tooth is these days. 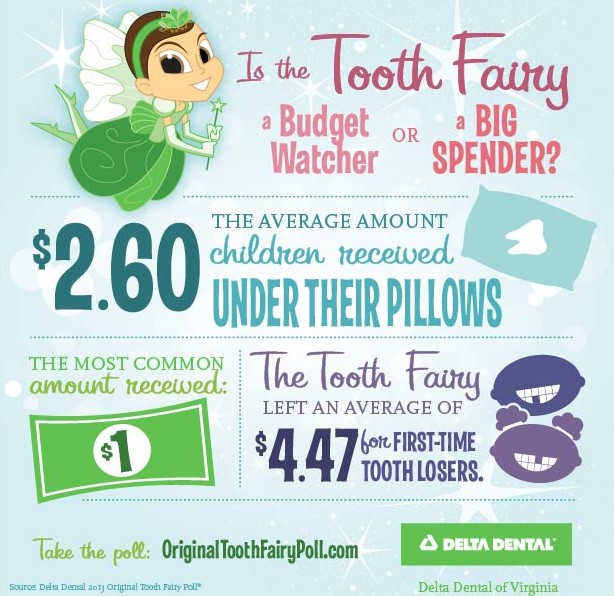 According to The Original Tooth Fairy Poll®, sponsored by Delta Dental, the Tooth Fairy is slightly less generous in Virginia compared to the national average.1 While parents in other parts of the country report the going rate for a lost baby tooth at $3.50, the average for Virginia in 2013 was $2.60. Almost half the time, the lost-tooth gift was $1. But when it comes to gifts for losing the first tooth, the Tooth Fairy loosened up her purse strings a bit, with 62% of Virginia parents leaving more money for the first tooth – $4.47, on average.

“Leaving gifts from the Tooth Fairy is a great way to help make losing teeth less scary and more enjoyable for kids,” said George A. Levicki, DDS, president & CEO, Delta Dental of Virginia. “Delta Dental encourages parents to talk about the Tooth Fairy’s visits as a way to discuss good oral health even before a child loses their first tooth.”

Other Virginia findings from The Original Tooth Fairy Poll® include:

We suggest the following ways parents can use the Tooth Fairy as a way to teach kids about good oral health habits:

At Delta Dental, we believe in the power of a healthy smile. That's why it's our mission to help create more smiles and healthier people in our communities. Our mission We create healthy smiles in the community through our people, access to quality … END_OF_DOCUMENT_TOKEN_TO_BE_REPLACED